So today's update includes a new server term system which is much more flexible, this also includes the re implementation of whitelists and a new feature: blacklists.

The server terms can be chained, can now be case sensitive or insensitive (were all insensitive previously) and we have whitelists back and blacklists for servers now too.

We have a variety of title terms which will override our whitelist system, allowing streamers who don't have 'hasroot' whitelist to be be assigned to the whitelisted server anyway.

Also if someone doesn't list their server and we would use their fallback of a whitelist server, there's a further check for matching terms to exclude them, EG: purple, orange, public, PS, etc

It will take us awhile to get the data right so this works well, our @Team and @helpers have always helped keep us up to date with fallback servers. These help us deal with streamers that don't put server term in titles and some other behaviour.

I have whitelisted anyone who has no pixel data from before the launch of the public server and have already updated some new streamers with whitelist access, but it takes human intervention to help filter out public and whitelist and to get the best results.

But HasRoot used to have whitelists?

Back when Family RP was our main tracked server and had a public server we had an awful hardcoded system and flags for certain streamers (playsOnFamily).

This was back when server matches were actually hardcoded into the backing app. Each server had its own function that could be customised and was called to see if it applied.

As Family RP Public was shut down, we shut down those features and stopped using those flags.

When this happened it meant I could largely simplify all of that awful hardcoded nonsense to include/exclude certain regular expressions per server to see if they matched.

This worked kind of ok until the first phase of OTV. It worked awfully for separating them, as some no doubt...

...HasRoot has been growing with the new boom, and the amount of streamers and characters to keep up with has also hugely increased. 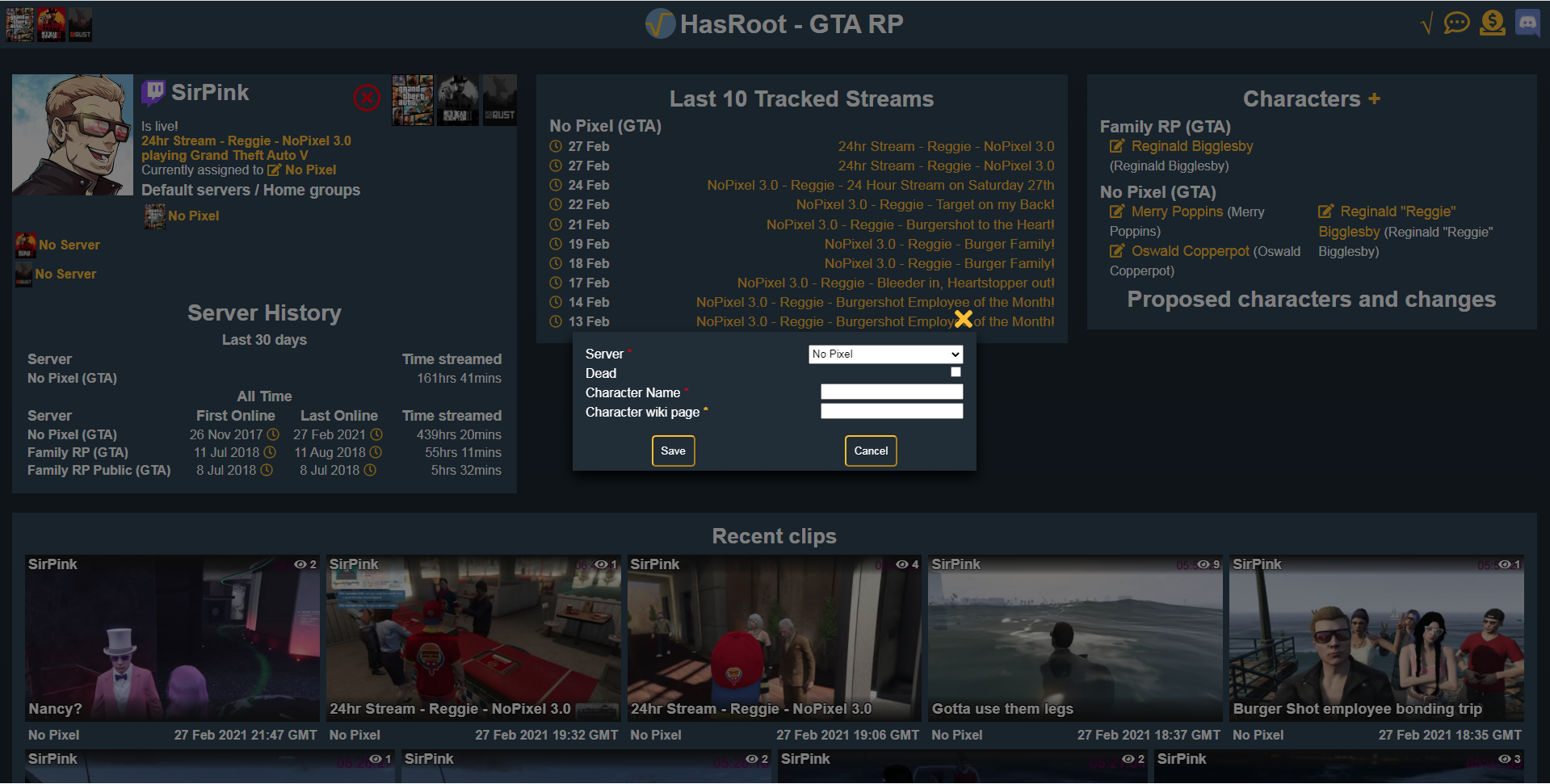 We have a very simple system to add/edit characters and assign fallbacks (if there are no server terms matched in a title) for streamers on HasRoot via the streamer profiles. You can even suggest moving a streamer who is incorrectly assigned to a different server.

We are always open to anyone who wants to help but we are at a point that we could really use more people to help out. I am planing in future to allow everyone to suggest changes but currently we still will require people to atleast be a helper.

There are no activity requirements, you can make 1 change or 100, but any little bit of work helping keep HasRoot up to date for yourselves and for all of our users is greatly appreciated.

So if you would be interested in adding character data and such please get in touch with me either via dms or via the feedback function.

A quick reminder that streamers can propose changes to their own data via https://gtarp.hasroot.com/streamerSettings.php

Also I will be making a big blog post about it soon, but here's a little teaser of something that has been distracting me lately.

In the mean time you should check out The Daily Los Santos and their discord. Maybe post a recap or two?

Once it is released I will be back to work on some cool new HasRoot features I have planned and improvements.

Hope you are all enjoying the site. If you see a bug please let me know, I have noticed a couple I need to fix but yea, distracted.

Also thanks once again to all our existing helpers and team members who have helped make the site a better experience for everyone over the years.

Just a quick blog to state that I have changed up the default settings on the streamlist. I also added in a title expand when a stream is hovered/selected though I haven't added a toggle option for this yet in settings.

For the new defaults I have went with server gapping row, column and container and for streams names above pov, one line titles and transparent borders.

If you prefered any of the old settings or want to make the streams bigger/smaller remember you can change your settings via the cog icon on the streamlist page. You can see me messing with them here https://i.imgur.com/VLbVkj2.mp4

You can sort the streamlist via the new sidepanel

Also a reminder/announcement? With the new streamlist side panel there also is a sort for the streamlist, you can sort by viewer or name and by clicking the type of sort again it will invert direction.

Sorting via the sidelist will not update as viewers change or new streams come online, they will still appear at the bottom.

I also will not be offering a way to default sort on load, keeping the order of the streams on load as semi 'random' has been an intentional design choice for a long time. It gives people the opportunity to see smaller streamers that they may not come across otherwise. That being said it is useful to be able to sort when youre actively looking for a stream, which is why I have included it in the 5.0 update.

Hope you are all enjoying the new update,
ScottishRambler

As you have probably noticed I have relented and removed the gradients lol, they didn't go down well so I figured we would just go back to the solid colours. I actually quite like it but I do sort of miss them (at least the header gradient). I implemented the 'flat' mode as a theme for the site so when I do add theme selection it'l be an option for anyone who did like it.

I also upon advice from feedback and playing with the stream list settings decided to reduce the default preferred width for the streams. This resulted in an extra column in most of my tests of different window sizes, even with gapping enabled. 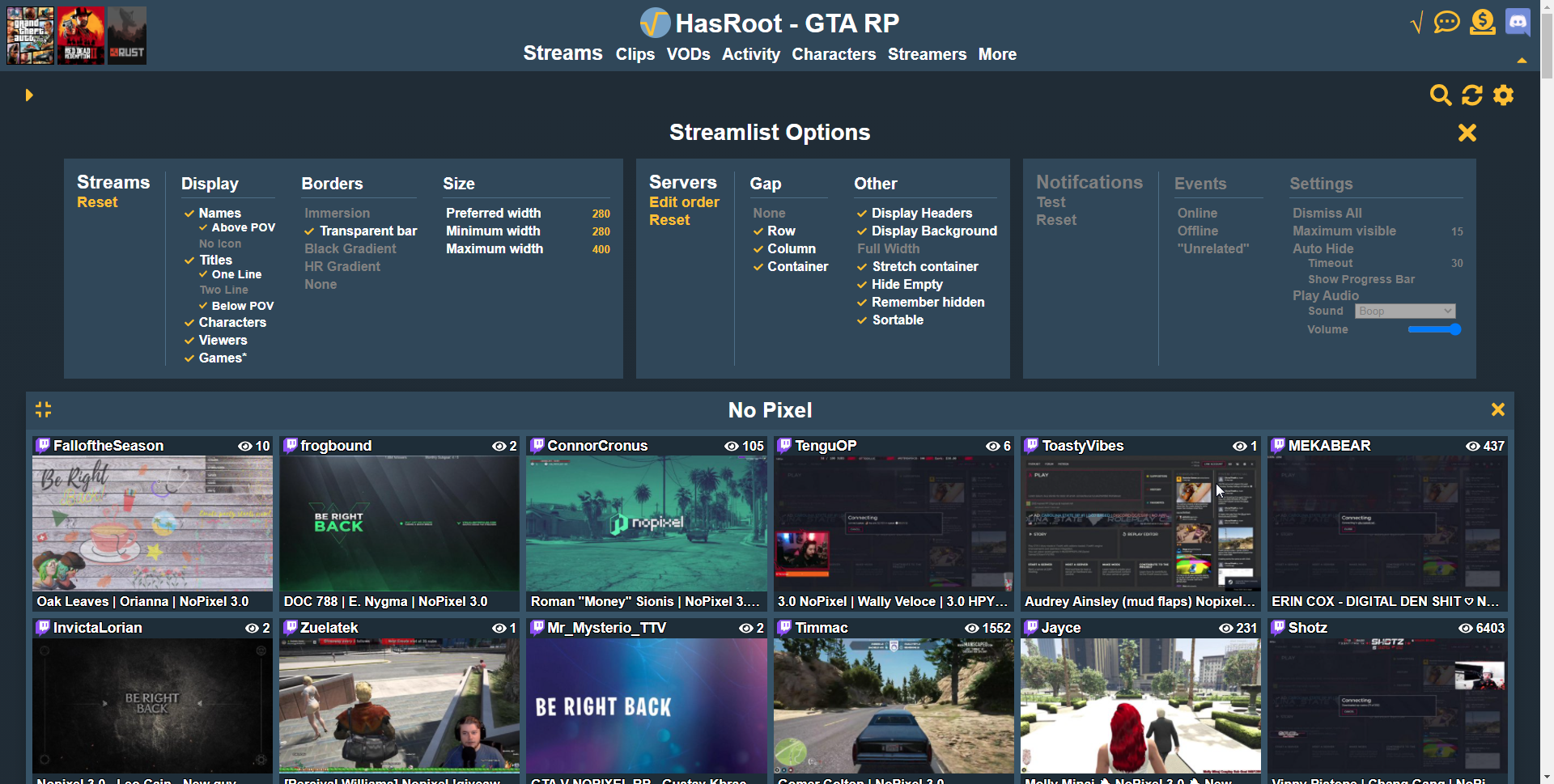 I am also probably going to go further however and change the defaults to those shown in the right. The new stream list options system allows for a lot more customization than the old ones did, so if you haven't checked it out you should have a play with it. If you have any suggestions for different options I should add let me know as the new system for them is pretty simple and flexible.

After some feedback on the new update I had a play around with them and I think these are prolly much better defaults than the 'Wall of PoVs' we launched with. It goes back to the old sort of style and look of HasRoot and I do think overall it is more functional, easier to read and just better. I started the streamlist update with the idea of borders = bad, and may have went a little too far.

I do think there are some people who would prefer the wall to wall POVs and this is why I added a lot of configuration options. So all you would have to do in that instance is just turn off all the gaps and above/below POVs. I really should add some presets so that people can try different groups of settings but that wont be immediate.

If you prefer the 'classic' look over the 'wall of PoVs' or vice versa let me know via the feedback function or on discord.

Hope you are all enjoying the site and thanks for putting up with the random changes going on.

So as I am sure you have all noticed by now HasRoot has changed. It is the largest visual update to the site so far and includes a bunch of new updates to the streamlist. In this long blog I will touch on some of the reasons why I made the changes and what issues I was trying to address. If you would rather just jump straight into the new update be sure to check out the new streamlist settings (especially preferred size) and side panel!

So why a new site update?

Over the years HasRoot has grown from a one page site to a much larger project. As things went along more functionality and pages have been added and we now track far more servers than I ever even considered, we now also track over 11k streamers. I am not a designer and have often thrown my hands up as far as design goes and trying to make things look good.

Recently however I had been working on a a prototype project for a future collaboration, the functionality was all there and I had some ok ideas but my execution was awful. After some sobering feedback I reached out to Lilly who is a HasRoot Team member who has design and art experience. Since joining she had always helped me out with suggestions or looking at some new small thing I was working on and giving feedback but this time she really helped beat some basic design sense into me. The result was light years better, the same original concept just better execution and from that experience I gained some confidence (perhaps foolishly).

As things with that project slowed down for awhile I decided to use my new found confidence to try and tackle some of the things that have long bothered me about the HasRoot site.

The issues I wanted to address

The menu bar kept growing in complexity and was getting more clunky, it wasn't touch/mobile friendly and with HasRoot constantly adding more servers (and games) it was an ever growing issue. Partially because I was lazy and partially because of...

Read more
Last updated at 2021-02-06 09:52:57
Older Blogs
Enter a streamer name then select them from the autocomplete. This only searches streamers we track, if you think we are missing someone let us know via the feedback form or #incorrect-data on the discord.
No Streamers found with this name
This feedback form is for the Has Root site not No Pixel.
Empty